In this lecture and conversation, we explore Horton’s life and work, from his childhood in Sierra Leone, to the writing of his seminal works on politics.

A nationalist, his travels across West Africa allowed him to map the cultures and political consciousness of the many peoples of the region, championing the “African personality”. His influential writings would form the blueprint for the constitution of the first attempted centralised republicans in West Africa.

The Making of Asante Kings

The Future of African Development 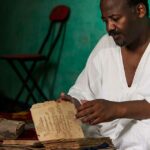